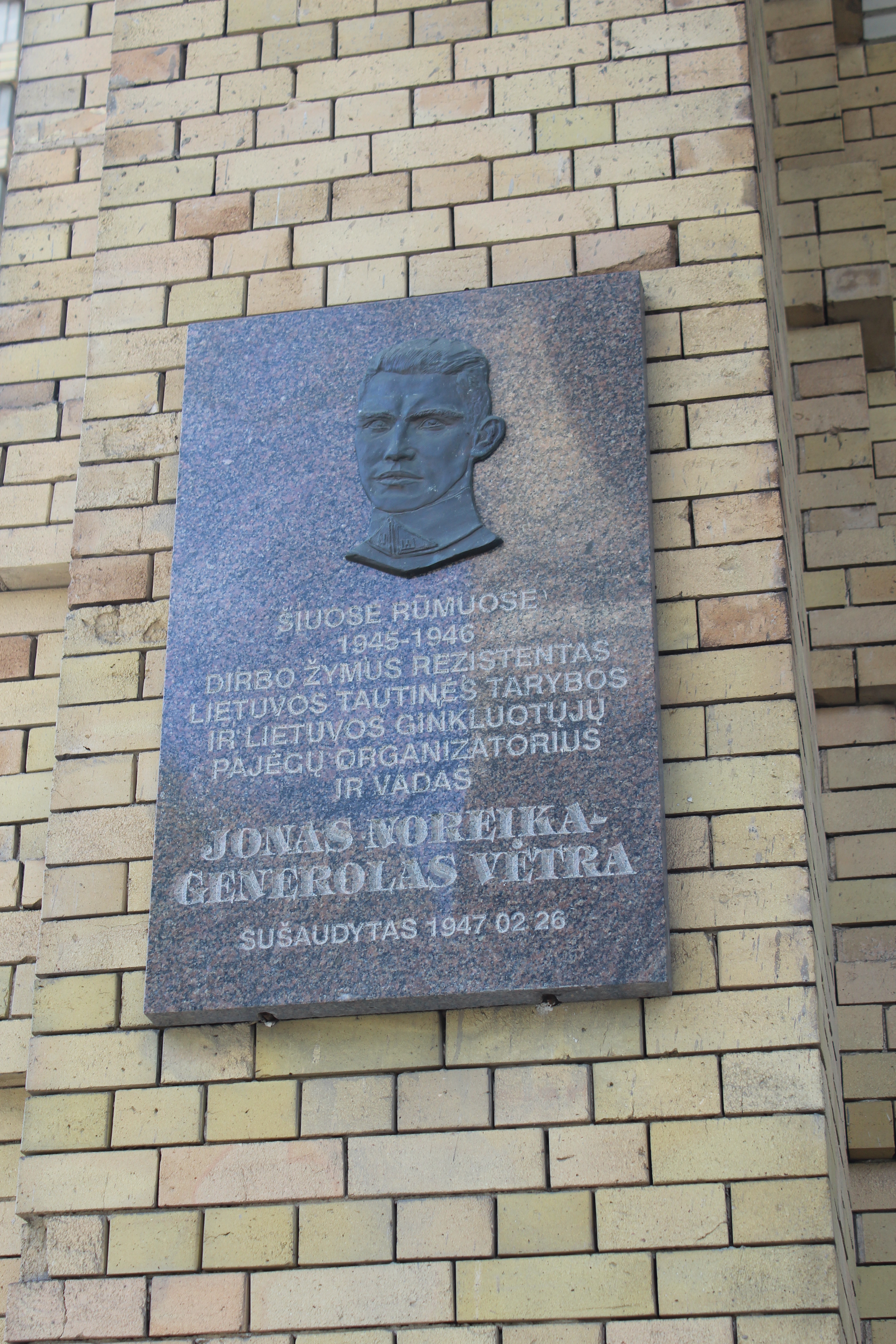 Once you click on the tab titled Noreika A Hero? you will see two subtabs: Captain Jonas Noreika Museum and Captain Jonas Noreika Archive, which make available online the documents that captured my grandfather’s crimes, his outlook, and his world. Under the Museum subtab, you will see another tab that will lead you to Orders Signed by Jonas Noreika. These orders show, without a doubt, that he was guilty of crimes against humanity, as defined by any genocide rubric. Simply put, he was a desk murderer.

Isn’t Noreika a general?
No, “General Storm” was his nom de guerre. He rose to the rank of captain in the military.

Meet the Curator of the Jonas Noreika Online Museum and Archive
Andrius Kulikauskas is the curator. His quest, since childhood, has been to know everything and apply that knowledge usefully. From 2016 to 2018 he taught philosophy, ethics and creative writing at Vilnius Gediminas Technical University. In those two years he gave 30 presentations in his original philosophy, including 3 at the World Congress of Philosophy in Beijing, China, and 3 at the World Congress of Universal Logic in Vichy, France. He has a Ph.D. in mathematics from the University of California at San Diego. His background is similar to mine, in that he was raised as a Lithuanian-American.

Andrius’s grandfather Jonas Kulikauskas was a Lithuanian Communist who was executed by the Nazis in 1941 and is in the mass grave at Vilkaviškis. His grandfather Bronius Kviklys was the author and organizer of the encyclopedias “Mūsų Lietuva” (4 volumes) and “Lietuvos Bažnyčios” (7 volumes). He received a medal from Pope John Paul II for the latter, which involved organizing a secret network to professionally photograph all of Soviet-occupied Lithuania’s churches. Andrius was sad and dismayed to learn in his research that his grandfather, Bronius Kviklys, worked in 1941 as a personal secretary for Vytautas Reivytis, the head of Nazi-occupied Lithuania’s security police, who led the arrest of about 100,000 Lithuanian Jews. Andrius now lives in the village of Eičiūnai, Lithuania. He is respected by Lithuanian nationalists for all the right reasons, including the punk song “Lietuva yra OK,” which he sang with “Naujas Kraujas” at “Roko maršas 1989,” part of Lithuania’s independence movement.

“In February 2018, Grant Gochin asked me to investigate Jonas Noreika’s crimes against humanity,” said Andrius Kulikauskas. “Evaldas Balčiūnas agreed to help me. Evaldas learned from Plungė residents about Silvia’s visit there. He also remembers being interviewed by her in Šiauliai when she was conducting her research on her grandfather in 2013. We reached out to her and were moved by her desire for the truth.”

For more information on these archives or to conduct research on your relatives in Lithuania, please contact Andrius Kulikauskas by email at ms@ms.lt

Noreika a Hero?
Much documentation in this archive has been amassed by Grant Gochin, a man of Lithuanian Jewish descent who was born in South Africa and is now living in California. Grant has at least 100 relatives who perished in the Holocaust in Lithuania. On his own initiative, he decided to find out how they were murdered. He discovered that many of their deaths were linked to Jonas Noreika’s orders to send them to a ghetto, after which they were murdered. You will find that Grant Gochin’s relentless query to Lithuania’s Genocide Centre—in English translation and the Lithuanian original—now serves as the basic structure of our online museum on Jonas Noreika. He has generously allowed all of this information to reside on my website. The documents, which his investigators—Andrius Kulikauskas and Evaldas Balčiūnas—assembled, form the heart of the Captain Jonas Noreika Archive.

I only met Grant Gochin in April 2018. After years of independent research, we both discovered much of the same material about Jonas Noreika, and we both came to the same conclusion. It could only be described as kismet. From that moment, when we realized we were no longer working in isolation, our efforts were doubly energized.

What does the archive offer?
The Jonas Noreika Archive offers an opportunity for a full-fledged exploration of Lithuanian crimes against humanity, especially against Lithuania’s Jews, but also against Lithuanians, Poles, Russians, Roma and others. In understanding whether, what, how, and why we did wrong in the past, we take responsibility for our future. We bring together for dialogue all who care about Lithuania.

What have we learned?
We need to empathize with victims, but if we want to understand what happened, we also need to try to understand the perpetrators. My grandfather, Jonas Noreika, was heroic, but not a hero. He was a complex person who simply did wrong. All of us associated with this archive and this project are encouraged that Litvaks and Lithuanians wish for a shared history based on truth, and hope that truth will eventually lead us to true reconciliation.

We hope you will find the documents helpful. This is only the beginning, as we will continue to add more documents in the coming months.

For more information on these archives or to conduct research on your relatives in Lithuania, please contact Andrius Kulikauskas by email at ms@ms.lt