I thought I’d continue describing the 10-Year Memorial Mass for my mother that I began during last week’s blog. The occasion concerned my reversion, or the recovery of my lost faith. 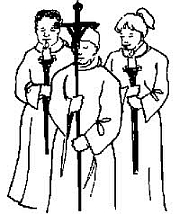 Father Saulaitis processed with a cross-bearer, two candle bearers, flanked by Deacon Franco, my husband, who carried the Book of Gospels overhead. He walked like an angel steadily down the aisle, dressed in a long white alb, covered by a white dalmatic, a long thick white rope cinched at his waist. His expression was calm, as he nodded a quick hello to those attendees he knew. We caught each other’s eyes before he ascended the three stairs to the sanctuary.

Once at the altar, Father Saulaitis greeted us in Lithuanian. “In the name of the Father, the Son, and the Holy Spirit. The grace of the Lord Jesus Christ and the love of God and the fellowship of the Holy Spirit be with you all.” I had confessed to Father Saulaitis as a child at Lithuanian summer camps. He had presided over Mom’s funeral in Vilnius ten years ago. He looked like my idea of a priest—brown eyes, soft like a lamb’s, a beard now overcome with gray.

During every Mass, it is said that heaven descends, that all of its inhabitants, including the angels and the saints, join us to celebrate what is about to occur. I asked the Blessed Virgin Mary, all the angels and all the saints to pray for me and my mother before our Lord. Were the angels watching over her? Did her life flash before her eyes, reliving the precious moments she had on earth? I only just understood why we’re here—to love God first, our neighbor second, ourselves third.

Until recently I had assumed she was in Heaven watching over me, praying before God to intercede for my family, that she had been surrounded by angels strumming harps while she sang a hymn in her beautiful soprano voice. I had been under this impression ever since her death, overlooking her lack of saintliness, disregarding my lack of faith, abysmally unaware of one of the most fundamental precepts of my Catholic faith: Only saints go directly to heaven upon their death. The rest of us go to purgatory to purge our sins and make us worthy of seeing the face of God, or if we reject Christ willfully, we are damned for eternity.

No one had warned me about this “side effect” to your husband becoming a deacon. My conversion crept up slowly during the four years of Franco’s preparation, and then descended suddenly after his ordination last May, like a font of cold water drenching my soul with new perception. I believe this final push for my full return to my Catholic faith resulted from the combination of Franco’s ordination and my mother’s prayers.

Here is the story I tell myself of how my conversion occurred. As a newly ordained deacon, Franco needed a full-fledged, rosary-carrying, scapular-wearing Catholic as a wife so he could more easily fulfill his mission as God’s servant. That probably would have been enough for God’s angels to administer the conversion job, but Mom got in the middle of it. It is said that just because you don’t believe in purgatory doesn’t mean it doesn’t exist. So when Mom landed in purgatory, she realized she had erred and began praying like she never did before.

I had been a New Ager, an amalgam of wiccan and Buddhist ideologies, like my mother when she died, and at the time, like her, I believed in reincarnation. I followed the latest trends in spirituality consisting of meditation, Reiki healings, aura readings, crystal therapy, a female god, and used Tarot cards.

I never completely severed my Catholic faith, but had lopped off huge chunks, becoming a common cafeteria Catholic, choosing the parts of the faith I liked, such as going to Mass, discarding those that made me uncomfortable, such as going to confession. Of course, I knew enough to suppress all this while attending the diaconate formation program with Franco for four years, but I had never completely dropped my New Age beliefs until a few months ago when I finally burned my thirty-two decks of Tarot cards. Perhaps Mom had to spend ten years in purgatory before God would allow her prayers to convert me. I don’t know.

In any case, however it happened, now that I was fully reverted to my Catholic faith, thanks to Mom and God’s angels, it was my turn to return the favor: I had to pray for Mom’s soul. I have no idea why God graced me with this occurrence, but I accepted it as a gift. My faith grew even stronger in the months to come, impelling me to pray the rosary every day and sit before the exposed blessed sacrament, something I had never done, never even imagined doing. I had been graced with a devotion to pray for the poor souls in purgatory, especially my relatives.

I also began to devour books on my faith that Franco was required to read during his diaconate formation, such as the How-to Book of the Mass, which awakened me to the meaning of the different parts of the Mass I was sitting through that day. Before, I had taken the Mass for granted, focusing my attention on the artwork, the music, the sunlight streaming through the stained glass windows, as if I were at a concert. Now I sat on the verge of tears as I comprehended the gift Christ left us, a re-enactment of his life and passion.