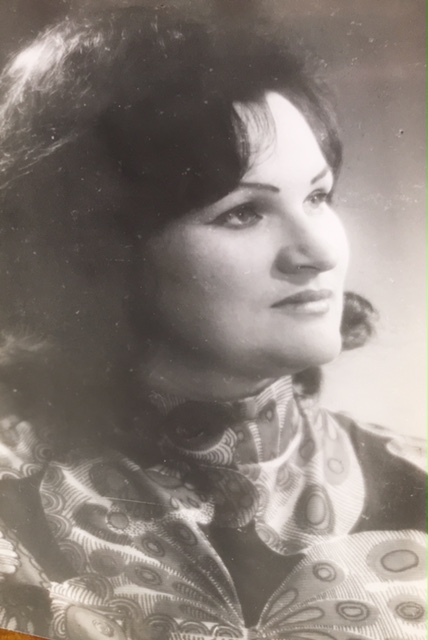 My mother’s birthday was last Friday, March 10th. She would have been 79 years old. She died at the age of 60 eighteen years ago on February 4, 2000. On her deathbed she asked me to write the story about her heroic father, never imagining what her request would unearth. Ten years after her death, our family had a ten-year anniversary Mass, which I still remember vividly. Happy birthday Mom!

In the narthex of Our Lady of the Snows, a white board with three panels stood propped on an easel displaying several photos of Mom, which my brother Ray and I had selected the evening before in preparation for her Requiem Missa, or Memorial Mass. We had lingered over the photos, while catching up with each other and drinking a glass of wine, trying to find the best depictions of the life of Dalia Maria Bernadette Noreika Kučėnas. To us, she had been our mother, but we also needed to show that she was our grandmother’s daughter, our father’s wife, a friend to many people we didn’t even know, and a tireless promoter for Lithuania’s freedom.

It seemed strange to reflect upon snapshots taken so many years before we even knew her. In one, she poses on a thick, brocaded ottoman with her eyes wide, her lips in a grim line. She is three years old in Lithuania, her hands tucked in a huge fur muff, her feet in shiny black rubber boots. It must have been 1942 when her father headed the Šiauliai region during the Nazi occupation. She looked like she lived in a comfortable style and wanted for nothing, although she also looks worried.

About two photos above and to the right, we had pasted a series of eight shots, taken in some booth when she couldn’t have been more than two. She is captured in various stages of crying—just starting, her lip about to tremble, then her face scrunched up, then a full blown-out bawl. Years later Mom had a predilection for taking pictures of my brother and me crying, poking us in the ribs until our lips trembled and our floods of tears came. “It’s more original,” Mom once explained, “than snapshots of children smiling. Everyone has those.”

In the middle panel of the board, toward the bottom, we had placed her family portrait while she lived in Buenos Aires. She looks to be about eight years old, and stands next to her mother, my grandmother, her Uncle Stasys, her Aunt Antanina, her Aunt Ruzytė and a man whom I presume was Aunt Ruzytė’s husband. Mom was already chubby, her face round and fluffy like a vanilla creme pie, a big white bow fastened to the top of her head, a dainty, lacy collar positioned over her dark dress. Her father had died for his country by then. She, along with her mother and Aunt Antanina, my grandfather’s favorite sister, had moved to Germany, then Switzerland, and then to Buenos Aires to pick up the pieces of their lives. For the next seven years, my mother attended school, my grandmother became a seamstress, my great aunt married, and they all learned Spanish until their visas to America materialized.

At the bottom center of the board, Mom sits with Dad at a restaurant in Acapulco, both wearing Mexican sombreros, one of the several times they escaped alone when they were still happily married, leaving Ray and me with her mother, who we called Močiutė (Mo-CHEW-tay).

Mom had died ten years ago on February 4, 2000, a First Friday, significant to Catholics, as Jesus Christ promised that those who would attend Mass for nine First Fridays in a row as reparation for sins committed against his sacred heart would not die under his displeasure. When God took Mom on a First Friday, we all thought that was a good sign for the state of her soul. First Saturdays, like today, are also significant as the Virgin appeared as Our Lady of Fatima to three children and asked through them that Catholics attend five First Saturday Masses in a row for sins committed against her immaculate heart, promising graces for salvation. Most Catholics who try to fulfill these obligations take this to mean they would not go to hell.

I have come to realize that it all revolves around praying, praying while you’re alive for somebody else, and hoping someone will pray for you when you’re dead. Our whole life could be spent in prayer for ourselves, our families, our relatives and friends who have died, and it still wouldn’t be enough to compensate for all our sins. Even so, we must try with love for God in our hearts, for it is the measure of that love that will save us, and nothing else. Prayer from the heart can help increase that love. The Memorial Mass is an act of holy love for a soul who has left the earth, even after ten years. While the Requiem Missa honors the earthly life of someone, its more profound spiritual purpose is to pray for that person’s soul, because it is assumed that soul might still be in purgatory. The intensity of love in those prayers, especially within a Mass, could help shorten that poor soul’s suffering in purgatory.

The guests stamped their feet and shook off the snow from their coats, said hello to my father, brother, and me. After welcoming them, we led them to the display of Mom’s pictures. My brother Ray and I grew up with a mother who was an opera star, and the photos of her standing next to a piano, dressed in a black gown, hair styled into a bouffant brought back memories of her rehearsals at home—her voice warm-ups, her vast collection of classical music in albums that now collect dust in Dad’s attic. In one photo, she swings a wicker basket in a cigarette factory, wearing a blue and white costume of a common worker named Carmen. As the lead in Silver Day, a Lithuanian opera, she holds a generous bouquet of roses. A glittering black and silver gown hugs her body, just after she had lost about a hundred pounds and never felt better. In yet another, she is Mimi in La Boheme.

At the top right corner of the tri-board, Mom is emphatically shaking the hand of Lithuania’s President Algirdas Brazauskas. Women dressed in Lithuanian costumes pose in the background while another photographer stands in the foreground, shooting from the opposite angle. Mom was in her political prime at the time, and had lobbied President Brazauskas for favors concerning her father. When Lithuania finally achieved its freedom from the Communists in 1990, Mom flew to her homeland to unearth more information about her father. Before diabetes took her at age sixty, Mom had endlessly promoted the unwritten book for years, for as long as I can remember, ever since I was born.

I left the guests, who were comparing memories, and entered the nave of our parish. My husband Franco and I had been parishioners of Our Lady of the Snows since 1994 when we moved into the neighborhood. The pews were arranged in a semi-circle around the altar, providing a holy, cozy mood. A pewter baptismal fountain stood at the entrance, positioned like a flying saucer, its basin the size of a first-generation satellite dish. When we were considering purchasing our home in this area, the builder’s wife sweetened the deal by telling us we’d be close to the church with a “huge, huge fountain.” Catholics from beyond our parish, from as far away as Texas, flock to have their babies baptized here so that they could immortalize the moment in their minds and in photographs next to that famed fountain. I dipped the fingertips of my right hand into its cold water and made the sign of the cross. In the name of the Father, the Son, and the Holy Spirit.

As I stood near the baptismal font, still about ten minutes before Mass was to begin, I reveled in the soundtrack of Mom singing. I had chosen three selections from the tape of her songs that was released after her death, and requested they be played as a way to set the mood before the Requiem. Her voice pierced me to the core. When I closed my eyes, I could see her at the front of the church humming an old Lithuanian folk song, “I Remember the Little Home.” I could hear her pause for breaths. When she began “I am with Mother,” I felt more composed and opened my eyes to listen. Her lilting voice enveloped me with the nourishing warmth and intimacy that was her trademark. She had a dramatic coloratura soprano of great flexibility and sustaining power, a rich and emotive tone with a bright, full timbre that could sing over a full orchestra, although on this recording she was accompanied by only a piano and violin.

Most of the guests had arrived by now, so I took my seat near the sanctuary to pray for Mom before Mass. I knelt on the cushioned board. It was good to remember Mom, but sometimes I remembered too much, especially when she sang. I pictured her stretching out her arms, her mouth open in a wide O, her eyebrows furrowed in concentration, her pillowy bosom rising with each new intake of air.

The last selection from Mom’s recording was a poem she wrote to her father called “Father’s Last Testament.” She composed it as a tribute to the last letter he wrote her in the KGB prison at the end of World War II. She read the poem like a trained actress with a slow cadence, crisping every syllable. A line she had always repeated from his letter to her was: Your heart is like the white dove on my windowsill.

She always looked for doves on windowsills, in parks, flying off steeples of churches. Whenever she’d notice a white dove, she’d point to it with reverential radiance: “Look! Look!” We’d watch the dove circle above, believing it was the ghost of her father checking up on us.