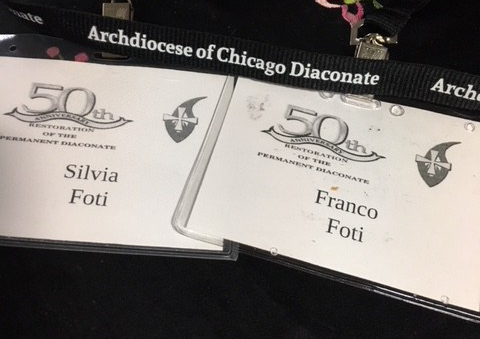 Deacon Franco and I attended the 50-year anniversary of the diaconate on Saturday, February 24, 2018, at St. Cletus in La Grange, where I relearned how in 1964, Vatican II established the diaconate in Lumen Gentium, a document I still keep promising myself to read. In 1967, the diaconate was officially established in the United States, with Chicago being at the forefront.  My take-away from the conference is that the more things change, the more they remain the same. In other words, the diaconate is still in a stage of exploration.

It is “beneficial that those who perform a truly diaconal ministry be strengthened by the imposition of hands, a tradition going back to the Apostles, and be more closely joined to the altar so that they may more effectively carry out their ministry through the sacramental grace of the diaconate.”

I have been told this often, especially when attending the diaconate program for four years with my husband who was ordained in 2009 in Chicago. In so many ways we feel fortunate that we were “formed” here. I was part of the first class of wives who had a choice to attend the entire program, a middle-of-the-road program, or “just” keynote events. At the time, I was getting my second Master’s degree, this one in education, and since I had a full course load of my own, I chose the lightest option in the diaconate formation program. I chose keynote events, but even that entailed attending the entire first year of initiation, followed by several key events, biweekly faith formation meetings, weekly spiritual direction, not to mention retreats. I kept muttering to my husband that he should attend my classes in education with me and join me during my student teaching experience for an entire semester, and we’d be even.

And yet, while almost everyone understands what a priest is, so few in the world understand what a deacon is, let alone a deacon’s wife. I know in my own travels to Lithuania, for example, in 2013, no one understood what a deacon was.  I tried to explain it, but kept being met by blank faces. Priests have had 2,000 years to fully develop, while permanent deacons have only had 50. The role of deacons’ wives have barely been studied.

While in the diaconate program with Franco, I learned to keep a low-profile because sometimes the wives could ruin it for their husbands. In many ways, I understood the wisdom of this because the wife can derail the deacon from his mission in more ways than one. Our primary role is to support our husband deacons, which I don’t want to diminish or disparage. I’ll never forget how every year, I had to write a letter to the Cardinal, giving my support and express permission to allow my husband to become a deacon. The power of the pen.

But now that my husband has been a deacon for nearly a decade, I feel safe starting a blog called The Deacon’s Wife. Nobody is going to ask my permission about my husband being a deacon anymore. And I don’t think they can defrock him because of me. Anymore.

At the conference, I learned that since 1967, 1,000 deacons have been ordained in Chicago. I also know that Chicago has about 600 active deacons. In the entire United States, there are about 15,000 active permanent deacons, according to a 2014 United States Conference of Catholic Bishops document. In contrast, there are about 37,500 priests in the United States, according to Center for Applied Research in the Apostolate. As the keynote speaker Rev. Paul McPartlan said, “The diaconate is a gift from the Holy Spirit that the church is still unpacking.” He pointed out, rather tongue-in-cheek, that the Church can take 100 years to fully receive the Vatican Council’s teaching. I think it will take at least that long to understand the diaconate within the community, let alone explaining it to everyone else, let alone the role of the deacon’s wife.

Deacon Richard Hudzik, D.Min., Vicar for Deacons, introduced the day, comparing the diaconate to the life cycle of a religious community, and he used the Missionaries of Charity by Mother Theresa as an example. In the founding days, the community had a charismatic leader who animated the group. In the time after the founder’s death in 1997, the elan of the spiritual founder continues. I learned how Mother Theresa was replaced by two women since then, whose names I am not familiar with, but that might be the point. Her missionary still lives on, even though she doesn’t.

I’m not sure who the founder of the permanent diaconate program is. Do we credit the Pope Paul VI who lead Vatican II when Lumen Gentium was written?  Do we credit Maximillian Kolbe who wrote about establishing the permanent diaconate while in a concentration camp? Maybe it’s the seven men from the Acts of the Apostles–St. Stephen, St. Philip, St. Prochorus, St. Nicanor, St. Timon, St. Parmenas, and St. Nicolaus–chosen to help the neglected widows.  I think everyone in the audience sensed the punchline coming: The Sacrament of the Holy Order didn’t come from those writing the Vatican II documents, but instead the One Whom They Sought To Serve. (I don’t know why I’m picturing Voldemort.)

It is the charism of Jesus Christ, the servant, that animates deacons to this day, and of course, left unspoken, their wives. Deacon Hudzik called the wives modern-day participants in the diaconate. We endure with our husbands, but beyond that, we are mostly on our own to find our way. In some ways, that might be a blessing because I could only imagine that if any true mandates from the church were proclaimed about what the deacon wives should do, the wives would justifiably grumble.

I personally liked how Deacon Hudzik alluded to Hamlet’s most famous speech when he said, the slings and arrows of a deacon’s life have a spiritual component and are more readily suffered when the focus is on the One Whose Charism We Seek.  (Just ignore the Voldemort allusion.)

As long as the slings and arrows don’t come from his wife, right? Then it’s all good.