Shoahgate: A Reflection on Our People by Rūta Vanagaitė and Efraim Zuroff 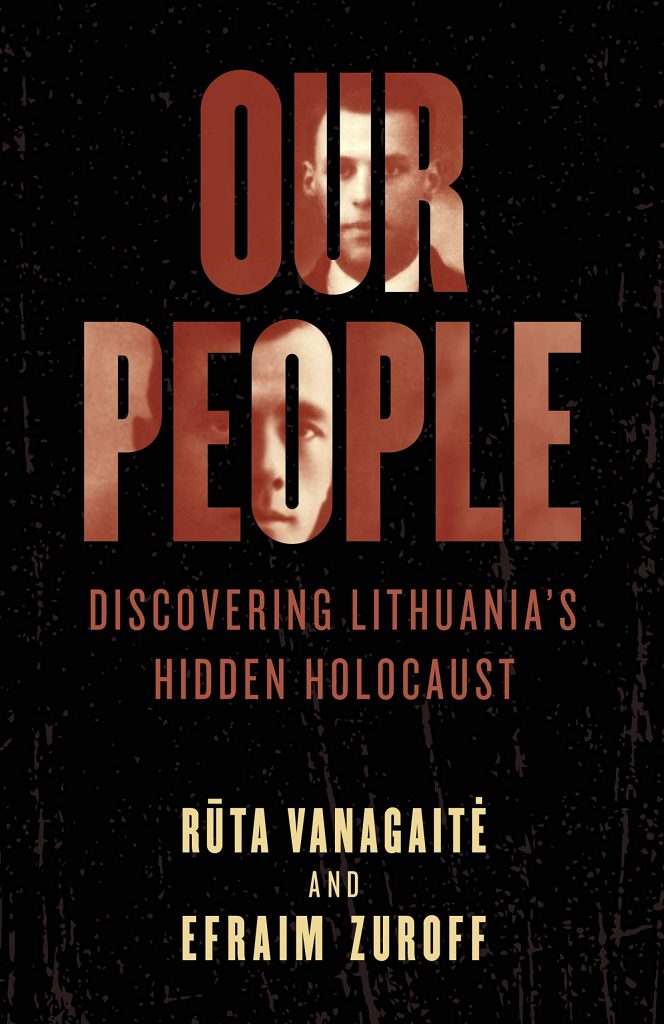 Just after Salon published my article on my grandfather (June 14, 2018), I received a message from Rūta Vanagaitė who requested we have a conversation via skype. At the time, I didn’t know who she was. (I had been working on my grandfather’s story in isolation for nearly 20 years and have only recently made connections with others investigating the Holocaust in Lithuania.)

Before our first conversation, I googled her. Up popped the New Yorker article (“How A Single Remark Stole A Lithuanian Writer’s Livelihood,” December 15, 2017) from which I learned that her best-selling book Musiškiai: Kelionė su Priešu (19,000 copies in Lithuanian originally published in 2016 by Alma Littera) had been banned by government officials in Lithuania. To give some perspective, in the United States, a book is considered a best seller if it sells 10,000 copies.

Someone in the Lithuanian government apparently gave the order to remove all copies of Our People and all her other best-selling books–which had nothing to do with the Holocaust–from private bookstore shelves, ostensibly because of an offhand comment she had made on television during a promotional book tour about Adolfas Ramanauskas, a legendary Lithuanian anti-Soviet resistance fighter.

As written in the New Yorker, “Ramanauskas led a guerrilla unit from 1945 to 1952 and lived under an alias for another five years before being arrested and executed. Vanagaitė had studied Ramanauskas’s K.G.B. file, and now she told the journalist what she had found in it: it seemed that Ramanauskas had at one point agreed to be a K.G.B. informant. She said that he may not have been the hero Lithuania holds him to be.”

Ramanauskas has been known as Vanagas, or Hawk.

Can the Lithuanian “democratic” government really ban books by one of its own best-selling authors?

I was getting a crash course about my beloved Lithuania.

Here’s my conclusion since then: If you’ve been raised by the Soviets you’re going to act like the Soviets. You can’t help it. That’s all you know.

Despite its independence from Russia for nearly three decades, it’s still a small and vulnerable country, and, understandably, insecure. It expects to be swallowed up by Russia any minute. If anything makes the country look bad, it’s never its own fault. There’s always a scapegoat—Russia. If they don’t like you, you’re automatically labelled a Russian spy.

Psychologically, the country still acts like a teen-ager. Although it was founded more than 1,000 years ago, it has had little opportunity to reach maturity, as it was ruled for most of its existence by Russia, Germany, or Poland. Under these circumstances, it’s amazing it has any identity at all.

When Rūta and I skyped for nearly an hour about two years ago, I realized how relieved I felt. I wasn’t the first to find incriminating information about Lithuanian’s role in the Holocaust, and it wasn’t on my shoulders alone. (Since then, I have met many other concerned Lithuanians who have the will, the courage, and the expertise to delve into this uncomfortable history, so a groundswell is forming.)

At the close of our conversation, she welcomed me as another “enemy of the state.” I laughed, but still had no idea what was in store, perhaps the subject of a future blog.

What’s the book about?
I had read the book in Lithuanian shortly after our conversation, and have recently reread it in English—Our People: Discovering Lithuania’s Hidden Holocaust (Rowman & Littlefield, 2020). I highly recommend it!

One of the most fascinating aspects of this book is the partnership between Rūta Vanagaitė and Efraim Zurroff, the head of the Wiesenthal Center in Jerusalem. She is a Lithuanian who heard about the Holocaust in her country, and she had the idea of pairing up with this famous Nazi hunter to investigate the story. The two of them wanted to visit all 200+ burial sites of Holocaust victims in the forests of Lithuania and talk to any witnesses who still remember what happened. The task was so overwhelming, however, they decided to focus on thirteen sites.

They literally knocked on people’s doors near the killing sites in the hopes of finding living witnesses who could talk about what happened in the summer of 1941. In all instances, they discovered that Lithuanians played the biggest role in killing Jews in their own towns.

Mr. Zuroff’s grandmother grew up in Šeduva, one of the towns they visited. The 800 Jews of that town were held in the airport hangars before they were taken to the forest and shot. One witness, Romas, who has worked for the town administration for 30 years, says, “It all happened here; people talk about how they used to ride Jews like horses, and cut their fingers off—that’s how they took the rings off.”

His sister Jūra, adds, “At the time there were no Germans here…. Those who lived by the forest related how they brought the Jews, and they heard the shooting.”

The conclusion is that anyone who was alive during that time period knew exactly what was going on—Lithuanians were killing Jews. Many of the Lithuanians were zealous and a few felt forced; some wanted to ingratiate themselves to the Nazis to prove their loyalty, and too many profited from obtaining the property of Jews once they had eliminated them.

Most were bystanders—stood by and did nothing.

But today is another story. No one will get shot for speaking out.

If you live in Lithuania, however, like Vanagaitė, you might lose your livelihood. I have heard of two individuals who lost their university teaching jobs after speaking out on the Holocaust in Lithuania.

In the book’s introduction, Mr. Zuroff outlines the challenges Lithuania has faced in the wake of the fall of the Soviet Union, especially how it was expected to deal with its history during the Holocaust. Once Lithuania gained its independence in 1990, its next goal was to join NATO. It was given six tasks by the European Union:

“Lithuania has fundamentally failed in dealing with almost all of the practical Holocaust-related issues it faced upon obtaining independence from the Soviets” (8).

Regarding #1, President Algirdas Brazauskas gave an apology to Israel in the Knesset on March 1, 1995, and promised that Nazi war criminals would be “prosecuted publicly, consistently, and conscientiously.”

The apology was a good start, but Lithuania has not punished anyone for Nazi war crimes since it gained independence.

Ironically, President Brazauskas gave the Order of the Vytis in 1997 to my grandfather, posthumously, to recognize his role in fighting the Communists. My brother and I stood at our mother’s side when she received the medal on her father’s behalf. It is sitting in my home office at the moment.

How deep is Lithuania’s complicity?
If you’re Lithuanian, you have heard a lot about the Russians and how they repressed our nation and sent our people to Siberia. I know I did while growing up. That is all I heard.

But, until recently, perhaps you have heard very little about the Holocaust in Lithuania, how 95 percent of the country’s Jews were killed in Lithuania. I was not aware of any of this until I started researching the story on my grandfather after my mother’s death on February 4, 2000.

Yes, the Nazis gave the orders to kill Jews, but the sad fact is that too many Lithuanians enthusiastically joined in the killing spree. Our People investigates why.

Not all of the guilty pulled a trigger. My grandfather, for example, wrote orders to segregate Jews to a ghetto, and to distribute their property. The government, via the Genocide Research Center, has said my grandfather had no idea what happened in a ghetto, and couldn’t imagine that the Jews would be killed, once segregated. They deemed him innocent of complicity.

Vanagaite also found damaging information about her own grandfather Jonas Vanagas, “a political prisoner convicted of anti-Soviet activities who froze to death within six months of being sent to Stalin’s Gulag,” as she wrote in Our People. In 1941, “he cut down a tree in Kavarskas to block the retreat of Red Army soldiers and ripped Stalin’s portrait off the wall of the school. He was turned in by his Lithuanian neighbors and arrested in 1944 when the Soviets returned” (25-26).

To her dismay, she found he played a role in the Holocaust. She read a 96-page document in the Lithuanian Special Archives. “During the German occupation, he had been a member of a commission which compiled lists of Jews. He didn’t take part directly in the mass murder of Jews…but all 10 Jews from Kavarskas who were on the list were taken to Ukmergė in August 1941” (26) and killed.

Are Lithuanians guilty if they only pulled a trigger?

The authors’ goal was to “reveal the true scope of Lithuanian complicity in the Shoah and the intentional cover-up of that unpleasant truth ever since the country regained its independence in 1990.”

On my end, as I was researching my grandfather’s complicity in the Shoah, I naively thought that once the information became public, Lithuania would honestly investigate what its ancestors did during World War II. To my horror, I quickly learned that Lithuania was mostly interested in covering it up.

The cover up has turned into the story, and the cover-up has now become, in many ways, an even bigger story than Lithuania’s role in killing Jews, which was already known to the outside world. The cover up is the news hook to the foreign press.

PrevPreviousStop anti-Semitic resolution declaring Lithuania has no responsibility for murders of Lithuanian Jews
NextMother’s Day: What would my mother think about the accusation of General Storm being a Nazi war criminal?Next

One comment on “Shoahgate: A Reflection on Our People by Rūta Vanagaitė and Efraim Zuroff”