Vytis–Lithuania’s symbol of chasing and fighting 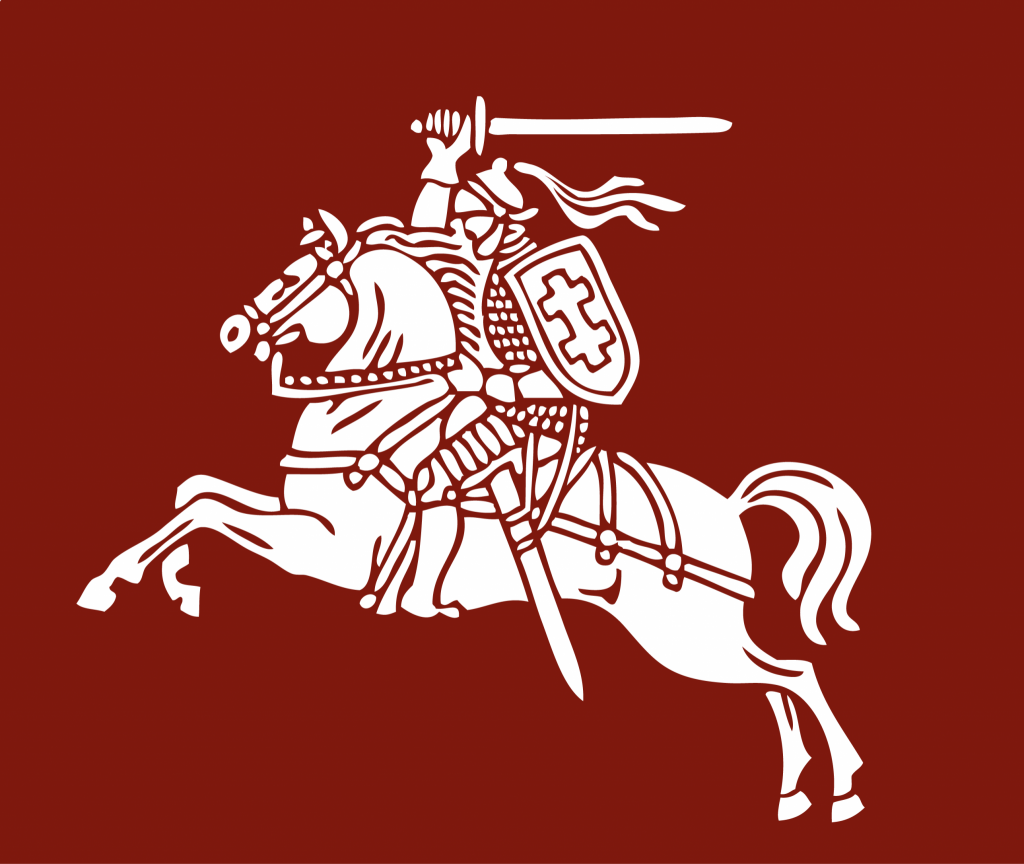 Every Lithuanian home in the world has an image of the Vytis (Vee-TISS) hanging on its walls, or standing on a shelf, or resting on the TV, or the piano, or decaled on a car’s rear window, or tattooed on an arm, a back, a leg. A Lithuanian knight holds a sword and a shield bearing a double cross, riding a horse to victory in defense of his beloved fatherland.

It’s a call to arms, reminding every Lithuanian in the world that it is necessary to fight for freedom, to sacrifice one’s life, to place the love of one’s country above all else—even, many argue, or at least silently believe, above the love of God. This is how it was in my home: I grew up feeling as if nationalism came before Catholicism. Saturday Lithuanian school could never be missed while Sunday Mass could. It was important to place the Vytis in a prominent spot, not hidden in a bedroom, like a crucifix or Madonna with child, but in a living room or a dining room, where guests could take a glimpse of it and feel the warm glow of patriotism.

The word Vytis means pursuer, someone who chases his foes. It has traditionally been associated with the ruler of the country hounding his enemies. But the Vytis is also symbolic of any soldier chasing away invaders. Often placed on a red background to signify life, courage and blood, the knight charges on a white horse, the sword held above his head. With his left hand, the Vytis clutches a shield bearing a double cross, all six ends equal in length.

Representing Lithuania for the past six centuries, the Vytis may have been originally used as a seal of Gediminas, the Grand Duke of Lithuania, who founded the nation’s capital with a dream. I first heard this story from my grandmother while sitting on her lap, her arms enveloping me, as she rocked back and forth. As she told this tale, her glistening blue eyes fixed upon an invisible, distant spot, which I knew to be Lithuania, the country she could see whenever she wanted to from her small kitchen in Chicago.

I’d watch her face become radiant with a glow that was always brought on when she talked about her homeland or her husband. She’d set aside the potato peeler, lift me upon her lap, and begin her tale in a slow, dramatic voice.

“In a dense forest of century-old Lithuanian oaks, bison roamed so plentifully that hunters couldn’t resist tracking them. One fine day in 1332, Duke Gediminas chased a bison to the top of a hill near the Neris River. After a lengthy face-off between the duke and bison, the killing dance began. Grunt! Snarl! Gediminas swung his sword, but missed, then was nearly trampled, able to save himself by nimbly jumping away from the bison’s charge in the nick of time.”

My grandmother would bounce me on her knees to give the jumping effect. “After several more rounds of twists and turns, Gediminas killed the bison with a fatal stab of his sword. Pah! Just to make sure, he rammed it in again and again. Pah! Pah!” She took her potato peeler and stabbed it twice in the air.

“Gediminas blew his sheep’s horn to summon his soldiers to a victorious, sumptuous dinner of roasted bison and cool, frothy mead. The soldiers fell asleep one by one, until Gediminas himself nodded off into a deep slumber. In his dream he witnessed an iron wolf poised at the identical spot he had killed the bison on the hill’s summit, near the River Neris, howling insistently. In response, a hundred wolves gathered around the hill and replied with their own yowls, a steady orchestra of wolf bellows. A-Whoo-oooo-oooo! A-Whoo-oooo-oooo!

“Once Gediminas awoke upon daybreak, he related his strange dream to his bewildered soldiers, but none could offer a satisfactory interpretation. It was a message sent from a god, so they summoned Krivė-Krivaitis Lizdeika, an elderly sage with a long, white beard. The sage told Gediminas the iron wolf meant he should build a sturdy castle on the hill, name the city after the wolf, vilkas, the country’s new capital. The city will stand as strong as iron against its enemies. The hundred wolf howls will ensure the glory of Lithuania.”

My grandmother would stand up to check the potatoes. “And that’s how our capital came to be called Vilnius,” she would explain, “in honor of the wolf in Gediminas’ dream.” Satisfied the potatoes looked fine, she’d wipe her hands on a towel and pull out a map of the world from one of her kitchen drawers. She’d point out Lithuania, a small country with a hyphenated border inside the Soviet Union. “Lithuania might be a small country now that belongs to Russia, but many, many years ago it was the largest country in Europe, stretching all the way from the Baltic Sea to the Black Sea, the largest, and some say the grandest, it has ever been.”