Jonas Kazimieras Noreika is a war hero in Lithuania. He is so beloved that a grammar school is named after him in his home town, bronze plaques of his image are on buildings in several cities where he worked or lived, and streets bear his name in municipalities. He is known as General Storm, his nom de guerre. At the end of WWII, he masterminded an uprising against the Communists. Captured by the KGB, along with eleven other key rebels, he was tortured, tried, and executed in the KGB prison in 1947, his body tossed in a mass grave, his story buried for nearly 50 years.

What is less known is that he was also called something else–a Nazi collaborator–complicit in the murder of 2,000 Jews in Plungė, 4,000 in Šiauliai, and 2,000 in Telšiai.

Lithuania has the highest percentage of Jews killed in all of Europe during the Holocaust–more than 95 percent.

Jonas was the youngest of ten children, born October 8, 1910, to a family living on a tenant farm in Šukonis, Lithuania. When he was three years old, his father lay dying from pneumonia. On his deathbed, surrounded by family, his father requested that the family find a way to send Jonas to school because it was already noted he was so intelligent.

During his early childhood, Lithuania was occupied by Russia, but when he was seven years old, on February 16, 1918, Lithuania gained its independence from its ancient enemy of 300 years.  At 21 years old, he enrolled in the Kaunas Military Academy and was soon stationed in Klaipėda. Within two years, he attended the Vytautas Didysis University of Law in Kaunas, splitting his time as a law student and soldier.

During this time, he wrote articles and short stories for newspapers and magazines, as well as a novel called Five Brothers. In 1933, at the age of 22, he wrote an anti-Semitic brochure titled “Hold Your Head High, Lithuanian,” in which he urged the country’s citizens to avoid purchasing goods from Jews, and to instead support Lithuanian-owned businesses. Out of nationalistic envy, he deemed Jews foreigners who controlled too much of the country’s economic activity. This is Lithuania’s Mein Kampf.

In 1936, he married Antanina Krapavičiūtė. During their wedding, one of the candles at the altar blew out, an ominous sign in a Lithuanian wedding, signifying their marriage was doomed. They were separated within seven years because he was sent to the Stutthof concentration camp and he died within eleven years in a KGB prison.

In 1938, he graduated from law school. By this time, he was a captain in the Lithuanian Army and was assigned to work in the Army Court. His daughter, Dalia Maria, was born in 1939. He continued to write newspaper articles and short stories, some of which were broadcast over the Kaunas Radio. He won a literary prize for one of his short stories.  His principle theme was fighting for freedom against the Russians. 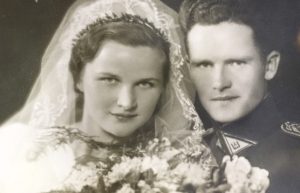 By 1940, Russia had once again occupied Lithuania. Many of its soldiers, including Jonas, went underground to plot their country’s freedom. Jonas’s wife was a teacher who was invited to teach in a one-room school house in Mardosai, situated in the Northwestern portion of Lithuania. Jonas used the school house as headquarters to plan an uprising against the Russians, timing it with the invasion of Germany, which promised Lithuania’s freedom.

On June 22, 1941, Jonas worked with 87 men in this uprising of thousands of Lithuanians against Russia’s occupation. Two days later, he watched the Germans march into Lithuania to join his country’s uprising, which lasted for five days. The Germans called it Operation Barbarossa, and it was also the start of the Holocaust in Lithuania. At the close of the uprising, the Russians were defeated, but Lithuania came under German occupation.

What has been kept a secret is that Jonas must have approved the killing of 2,000 Jews in Plungė in July 1941 as the leader of the uprising in the Northwestern portion of the country. Before, during, and after the uprising, he had been collaborating with Nazis, getting weapons and other supplies, as well as translating for them. Jonas became chairman of the Šiauliai Region during the Nazi occupation. He signed paperwork to round up Jews.  He signed about 100 documents related to the Holocaust in Lithuania. During that time, 5,000 Jews were placed in ghettoes and eventually shot in Šiauliai, and another 7,000 in Telšiai.  He is known as a Desk Murderer. It is unknown if he committed any murders directly by his own hand.

After this point, Jonas’s story is officially heroic, and it has been magnified and glorified to such an extent that it has overshadowed his Nazi collaboration, buried deeply into the footnotes of history. The WWII tide turned after the Battle of Stalingrad, and at this time Jonas began openly resisting the Nazis.  For example, when the Germans demanded high quotas of crops from the Lithuanian farmers to send to German soldiers, Jonas convinced the farmers to resist and keep a greater portion of the food for themselves. He also established a Lithuanian Cultural Center in Šiauliai.

In February 1943, the Nazis sent Jonas on a propaganda tour of a fish farm in Germany to demonstrate their technological efficiency. Jonas observed how proud the Nazis were in recycling their own excrement by feeding it to the fish.  When he returned to Šiauliai, he wrote a sardonic article that spoofed how the Germans regularly ate fish filled with their own shit. The Nazis were insulted and threw him in the jail of Šiauliai, where he was imprisoned for about two weeks.

Upon his release, he joined a boycott of Lithuanian men refusing to join the SS due to his Lithuanian nationalism. This too infuriated the Nazis. On March 17, 1943, the Nazis sent Jonas and 45 other prominent Lithuanian leaders to the Stutthoff concentration camp as hostages to scare the rest of the nation into submission. That was the last day he was seen by his wife and four-year-old daughter. 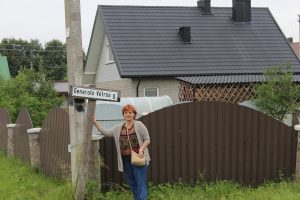 He kept in touch with his wife and daughter from the concentration camp through seventy-seven letters. He started writing a fairytale for his daughter, an allegory of the Nazis. The story had a princess kidnapped by a Witch who had turned many young boys into frogs. He couldn’t finish the fairytale because of the Russian invasion, when he was released from the concentration camp. Within months, the Russians conscripted him to their army.

With thousands of others, Jonas’s wife and daughter fled Lithuania in July 1944 before the Russians could stop them. They lived in Germany, Switzerland, and Argentina until they obtained visas to the United States, settling in Chicago in 1956.

In the fall of 1945, Jonas was released from the Russian Army and sent back to Lithuania. He obtained a position in the Science Academy as a legal consultant. During this time, he helped organize a key group of eleven rebels who planned to lead thousands of partisans to overthrow their Russian occupiers. Jonas was then known as General Storm. In early 1946, Jonas was betrayed. The KGB arrested him. During the trial, he was sentenced to death. On February 26, 1947, he was shot twice through the back of his skull.

In 1990, Lithuania obtained its independence from the Soviet Union. Jonas Noreika–General Storm–was recognized as a national hero. His daughter Dalia has been collecting material on her father for decades and had obtained copies of the KGB transcripts, promising to write a book about him. But she never did. On her deathbed, she asked her daughter Silvia to write the book. It took Silvia 20 years to finish it. In all, the story has been waiting 50 years to be revealed.

For more information, please go JonasNoreika.com — An independent portal for Lithuania to face the truth about the Holocaust. You will find an online museum, archives, and all the documents that crossed his desk while he was District Chair of the Šiauliai Region during the Nazi occupation.

Here is the last letter he wrote to his daughter from the KGB prison on Christmas Day in 1945.